Since ancient times, in the Japanese rush matting tradition dye is applied to a woven fabric and together with rush grass a bright pattern is weaved.
The oldest hanagoza was brought to Horinji Temple in Kyoto as a bed for the 33rd Emperor Suiko (554~628). With the change of our lifestyles, the beautiful rush mat has also developed. 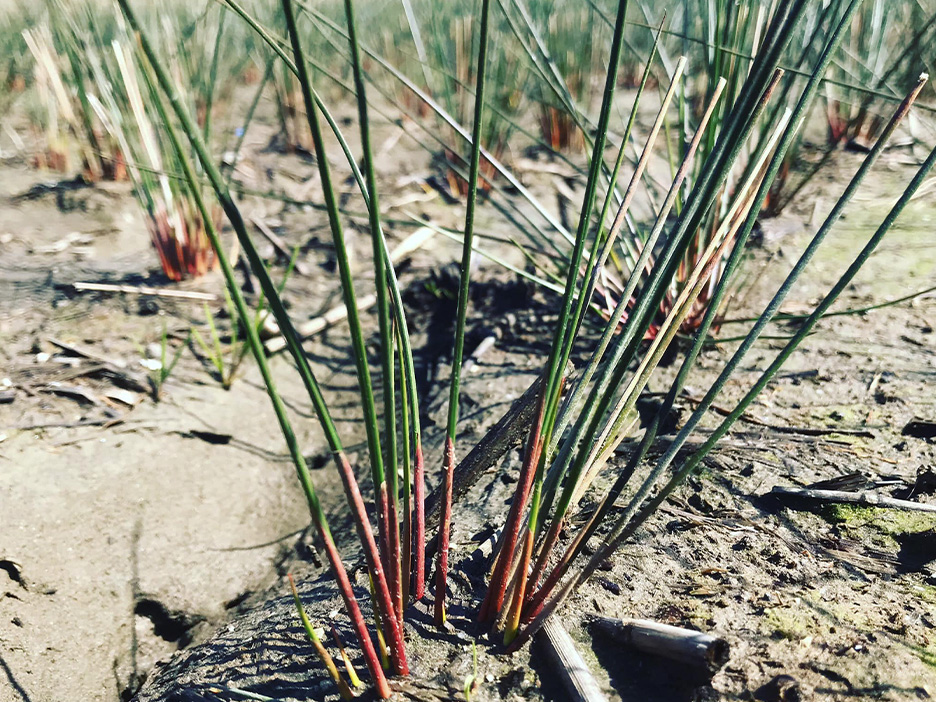 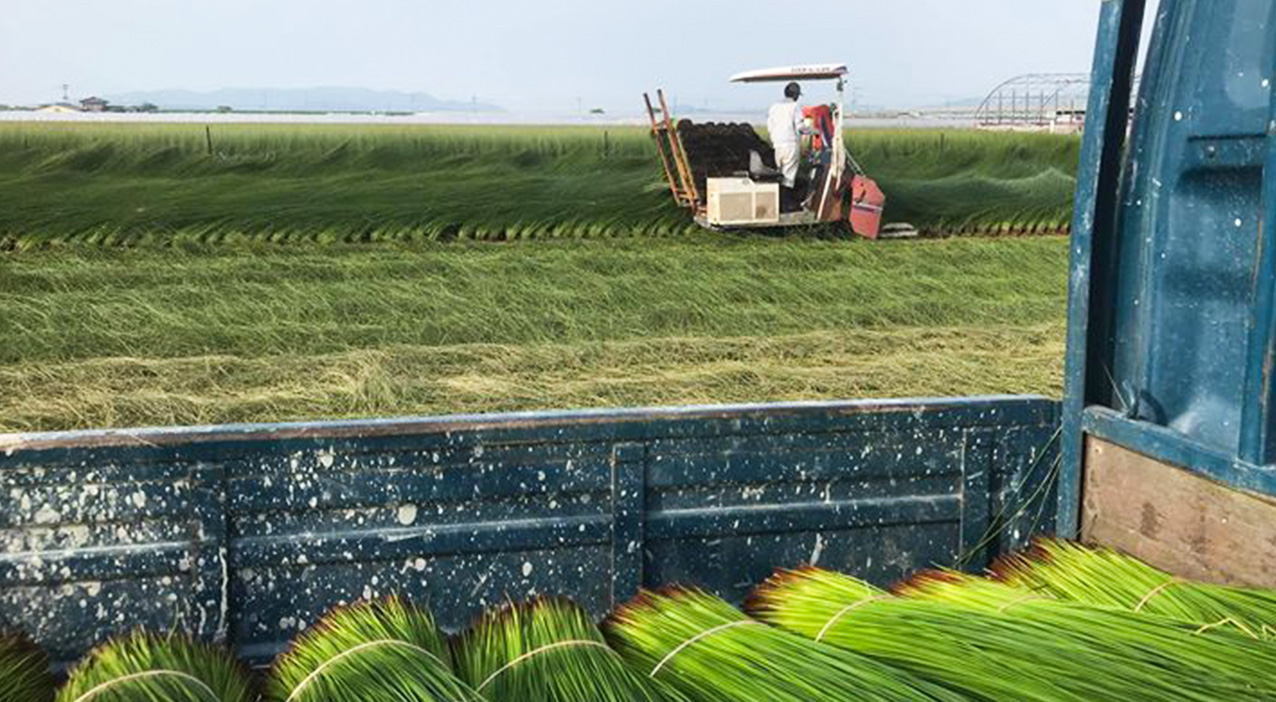 Rush grass is a monocotyledonous plant of the Juncaceae family. The rush mat called goza is made of igusa (Japanese soft rush grass) and yarn.
The cultivation period is: in August, the high-quality plants are separated from the nursery. Igusa is planted during the cold season of December, followed by cutting off the tips of the rush grass in May as to improve the germination of the new shoots, which then, are harvested in July. After that, the igusa is soaked in a mud called "dyed soil" and left to dry. This increases the colour and shine, preserves the colour tone, and brings out the fresh fragrance of rush grass.

Igusa has a refreshing scent that calms the Japanese people, absorbs many harmful substances and purifies the air. It absorbs formaldehyde, ammonia odor and isovaleric acid, which can cause the Sick Building Syndrome and lead to bad odours. Igusa is a natural air purifier.

The cross-section of the grass has countless sponge-like air holes that allow moisture to flow in and out of the grass. Its moisture regulating properties allow it to wick away moisture during the rainy season and summer and release moisture in winter to prevent it from drying out. It's also perfect for the Japanese climate, which has hot and humid summers and cold and low-humidity winters. 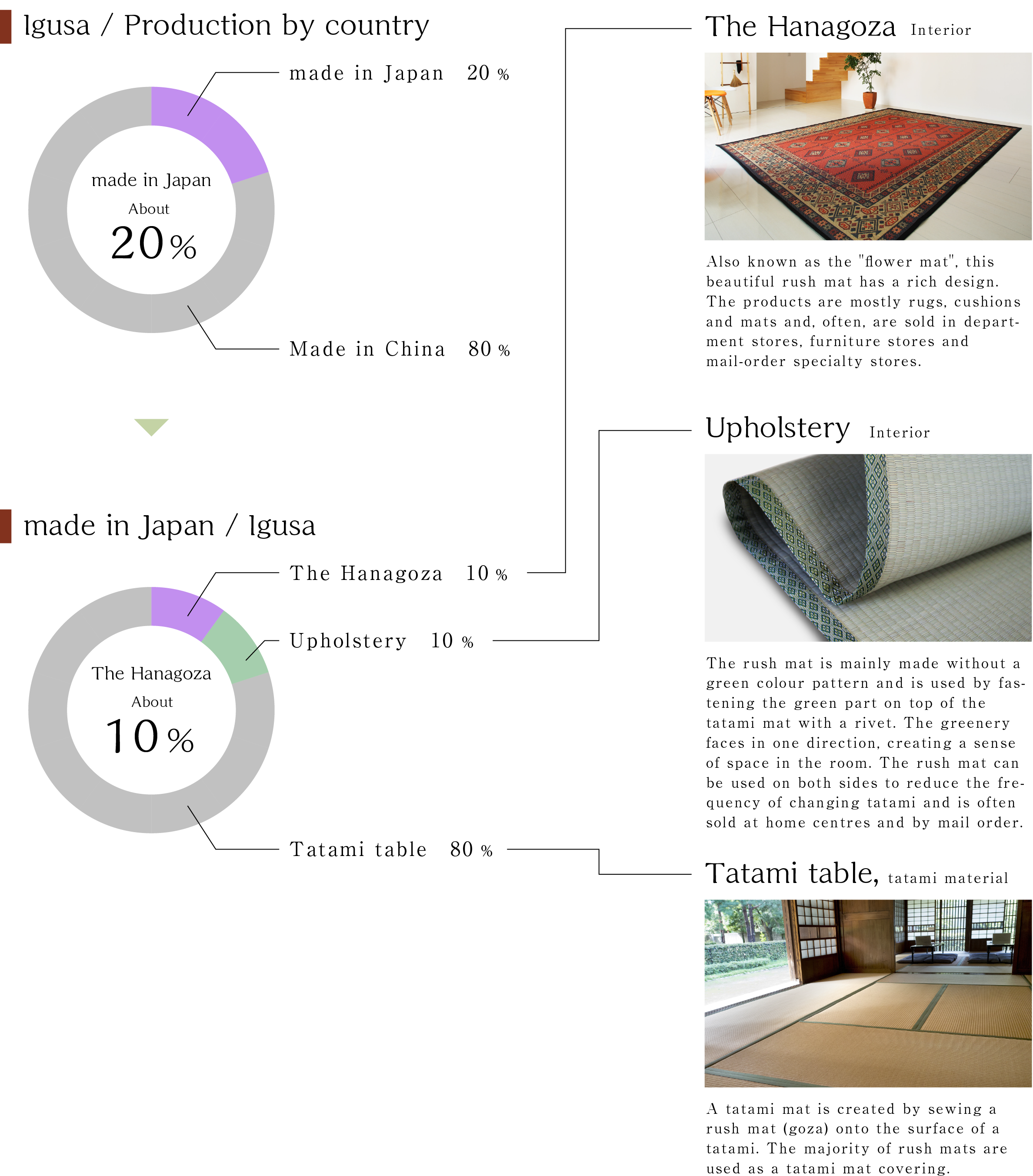 The gorgeous rush mat design is expressed by intricately weaving beautiful rush grass with warp yarn. The difference is made by the number of warp threads and the weaving method of the rush. 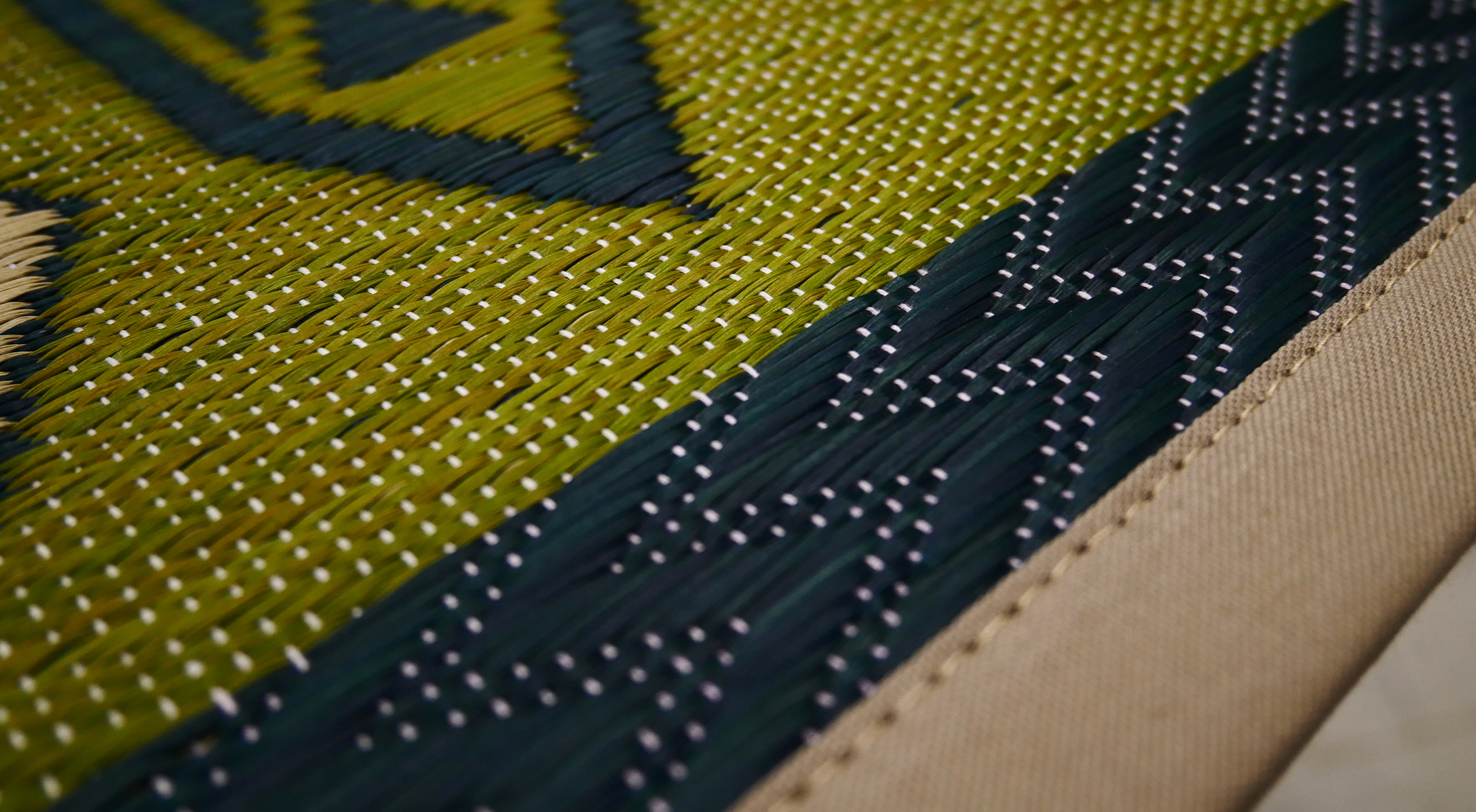 Because of the large number of threads, this weaving method can express delicate and beautiful patterns. The rush mat looks more three-dimensional because you can get a bumpier look. This is a magnificent and profound weaving method. 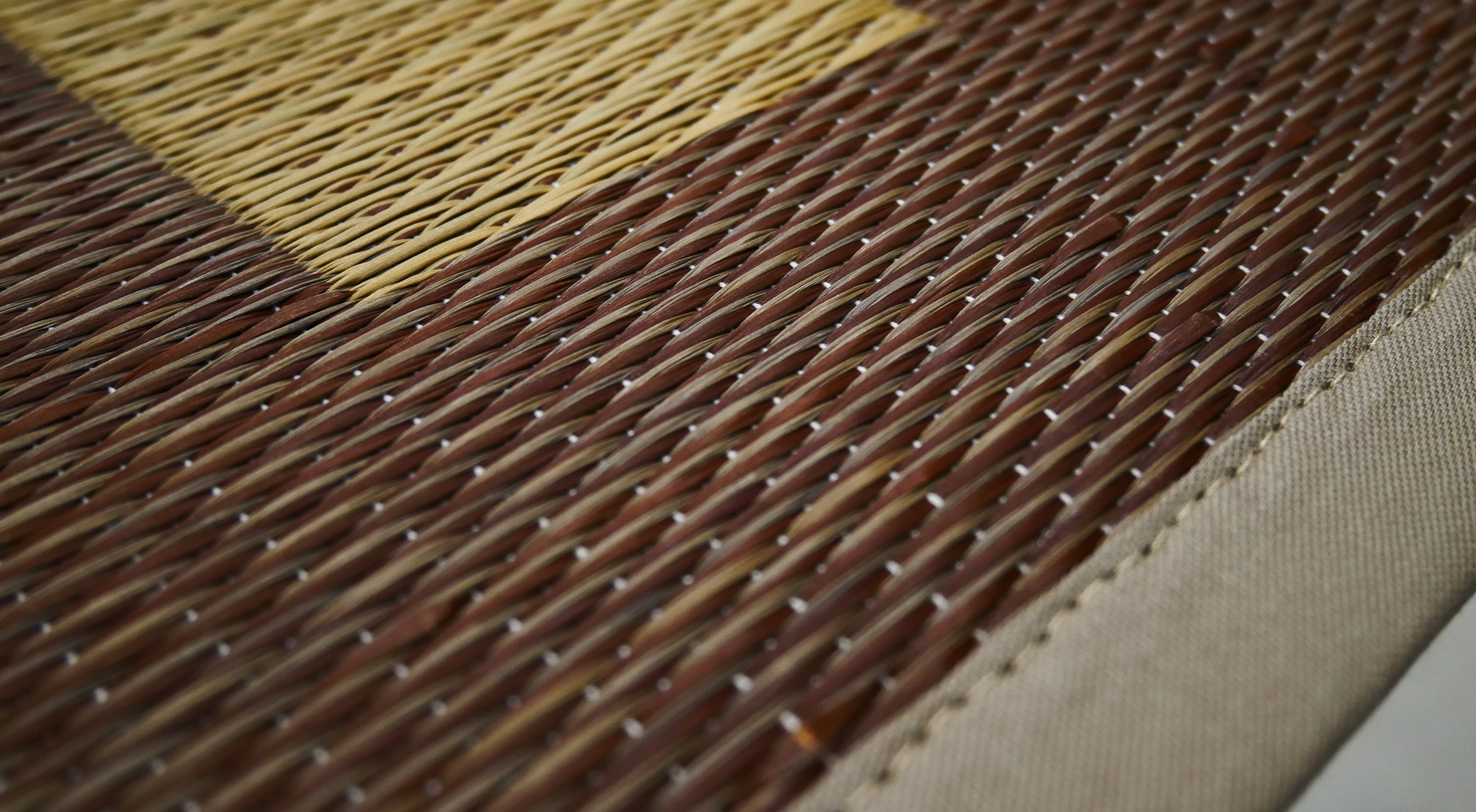 Also known as funu-ori(ori=weave), it is the easiest way to braid a rush mat. It is widely used to produce a stable rush mat with various crests. About 60% of the woven rush mats are made with this technique. 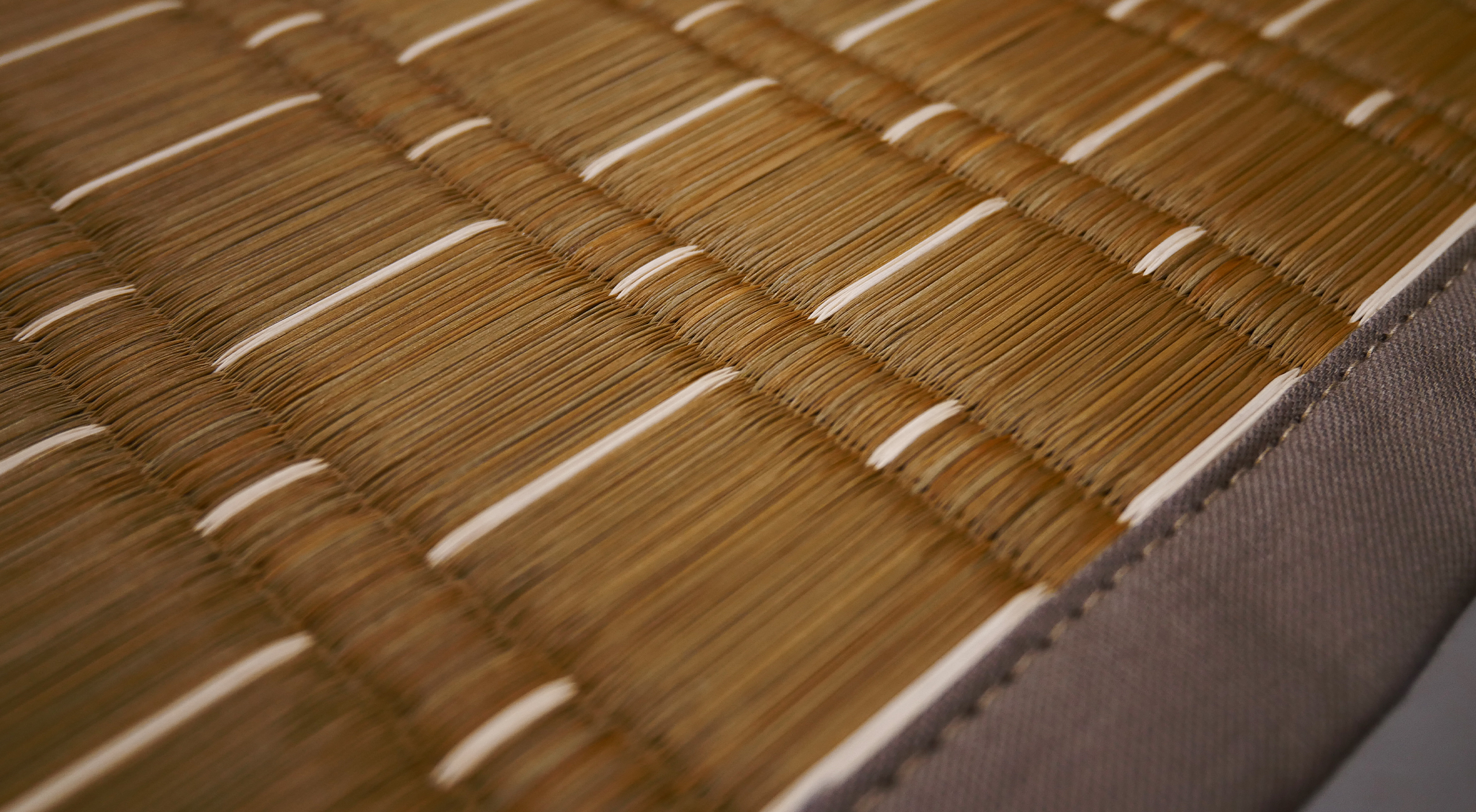 This is a traditional weaving method in the Chikugo region of Fukuoka Prefecture, where the 7:3 width is repeated in turns. The simplicity of this weaving method produces a flat surfaced rush mat with good elasticity (this is a special rush matting craft designated by the governor of Fukuoka).

〜 Part II: How to weave in the rushes 〜

This weaving method uses approximately three times more rushes than in a normal rush mat. The six colours of rush grass are delicately woven into the mat to create a complex pattern. The hanagoza is made of long, bright and flexible rush grass with good grain quality to it. The three-dimensional feeling makes it the most expensive rush mat in Japan.

This is a weaving method reproduced after the one invented by Nekame Isozaki in the Meiji era, which later was recreated on modern automatic looms. The front and back sides are woven separately and connected by warp threads, making it a double weave. The invention of the quadruple weaving led to the later sextuple weaving.

The meseki weave is a plain weave with a single warp and a single rush woven in alternating patterns. The rush mat is characterized by the low thickness and the visible threads on the surface. The rush mat lacks volume but is soft and solid. Depending on the number of warp threads, you can achieve a 11-meseki, a 22-meseki or a 33-meseki.

This traditional weaving method allows 2.5cm to 3cm between the rush and the warp threads. Thanks to its simple structure with large repeated rows of weaving lines, the rush mat becomes clogged with a pleasant texture and feeling of depth. It is often used as a sleeping goza. The intervals of 1.5 cm to 2.5 cm are called chumoku weave.